Microlab D22 is a very interesting outdoor speaker system with many additional features for users leading an active lifestyle. This is confirmed by the bright colors, the design with protection from external influences, the mount, and the strap. The speaker is able to entertain the user is favorite music from a mobile device or a memory card. Besides, it has FM-radio and the ability to use the speakerphone. Also, the advantages of this speaker should definitely burn a universal power supply. In general, the device is really nice-looking, well-made and fully justifies its price.

Microlab D22 is supplied in a white cardboard box with large "windows" through which you can see the speaker packed in blister. 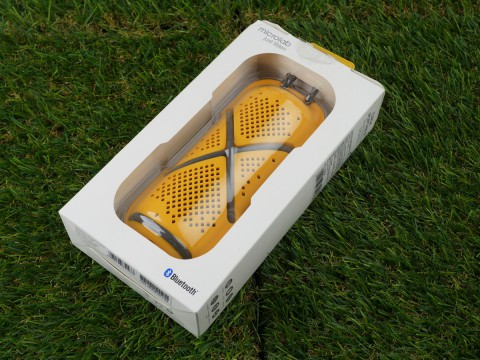 On each side inside the box are flat audio cable is 0.6 meters long with 3.5mm plugs on both ends, micro-USB cable to recharge the battery, warranty card and user manual. 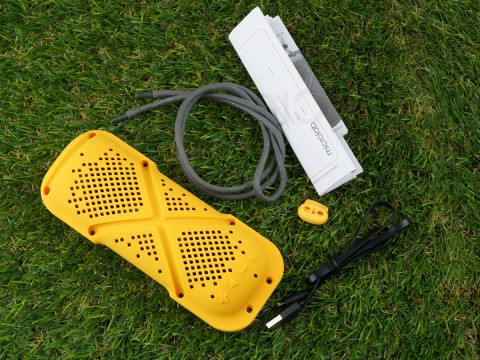 By its dimensions loudspeaker Microlab D22 fits easily into a small mesh pocket, which is in some bags and backpacks. 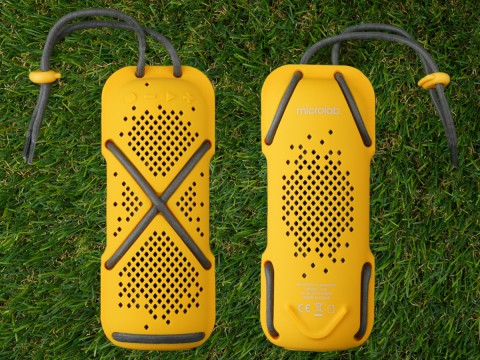 Hull form is rounded and sleek, like a submarine. Along the perimeter there is an imitation of the connecting flanges. The outer silicone case with soft-touch effect protects the internal hard case from bumps, dust and moisture. The speaker is available in five colors: orange, pink, light blue, light green and black, which helps to choose the most suitable option for everyone. 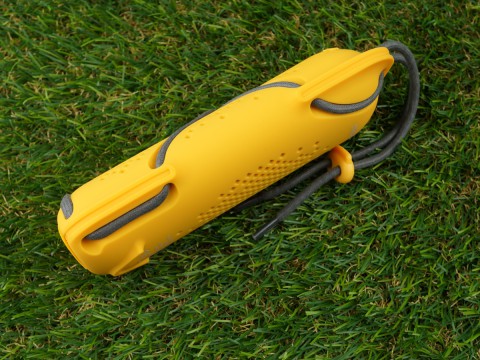 There are holes in the silicone sheath in which is a thick cord impregnated with a polymer to maintain the circular shape. For decorative effect, case color combines with cord color. For the bright ones the cord is dark gray, for the dark ones - green. 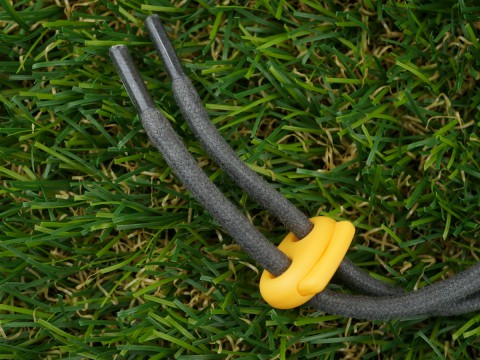 Due to the configuration of holes, power cord can be routed in several ways, leaving a loose loop at the end. There is also a robust plastic clip fastening the cord ends. All this provides a variety of options for carrying the speaker on the wrist or the shoulder, as well as its attachment to clothing or gear, such as a bicycle. 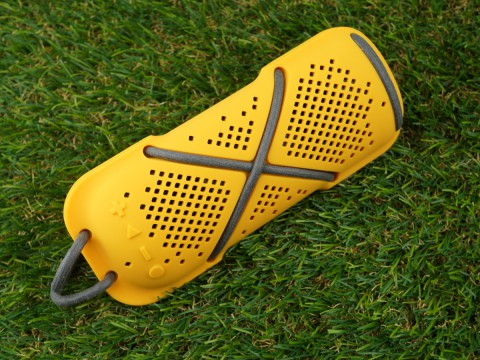 There are perforated grilles with diamond-shaped holes on the sidewalls of the speaker. On the front side, where the cable is laid X-shape, the device has two 1.5-inch wideband stereo. An oblong passive radiator reinforcing bass frequencies is on the reverse side in the center. 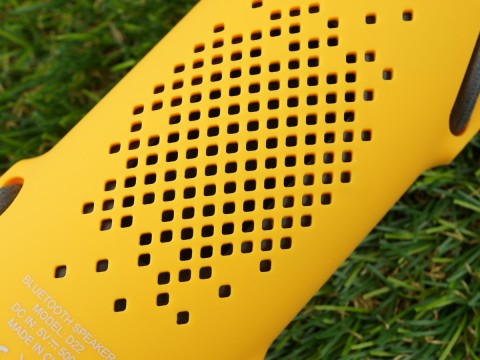 On the front side of the device are placed a loudspeaker and four buttons. LEDs are located at the bottom (white is Bluetooth-connection indicator, and red is the battery charge indicator). 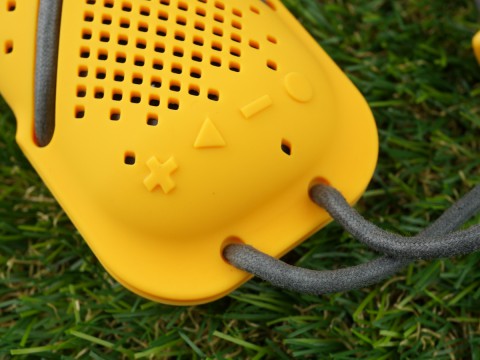 The reverse side of the envelope has a support in the shape of the letter V, which ensures an easy installation of speakers on a flat surface and a small gap needed for better sound.

At the bottom there is a tight-fitting cap, under which there is a compartment with three connectors: 3.5mm audio source for a wired connection, a slot for microSD (TransFlash), and micro-USB to recharge the internal battery. 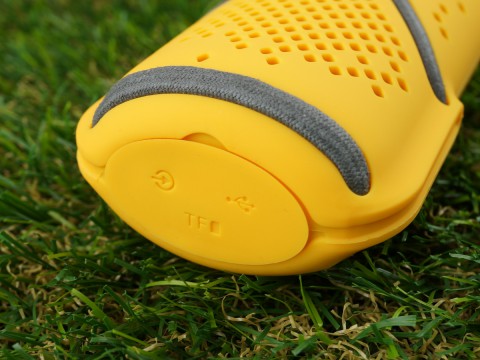 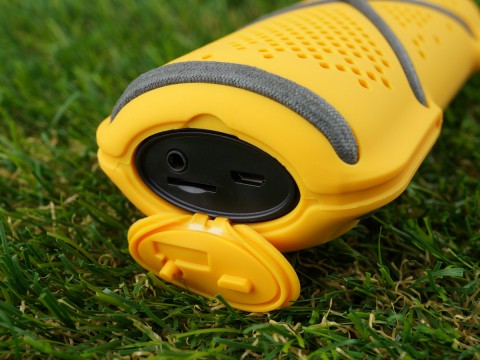 The main body of the speaker has four control buttons. The first (round) starts with a long battery pressing (2-3 seconds). With further short pressings switch modes: Bluetooth / Memory Card / FM-Receiver / Audio. The second button ("minus" sign) is used to lower the volume level (short press) or switch music tracks backwards playlist / radio station list (double-click). The third (triangle) button is responsible for the inclusion of playback, stop, answer an incoming call (short press) or dial the last incoming number (double tap). The last button ("plus" sign) serves to increase the volume (short press) or switch music tracks forward on the playlist / radio station list (double-click). Because of the relatively thick layer of silicone shell that protects the housing and buttons, the latter is not always correctly responds to pressing: The system sometimes confuses short single and double clicking. But this, of course, depends on how hard you play and manage user habits. 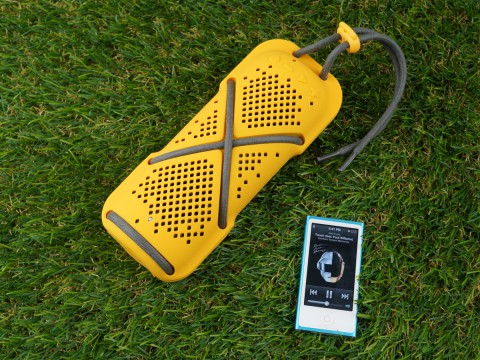 Microlab D22 is a wireless audio over Bluetooth, or using an audio cable. In the first case, "musical donors" may be smartphones. It provides for two ways of connecting to sources - tablets and other computers with Bluetooth technology. In the second, it will be added to the players and other audio devices equipped with a standard audio output. In addition, the speaker is able to operate completely independently, to use a microSD memory card slot to insert the appropriate media with recorded music.

Most independent speaker mode is as FM-radio. The embedded receiver turned to scan the FM-range and store all stations in the frequency range from 87.5 to 105.7 MHz. With good reception of a radio signal (depends on the FM-station) the sound quality was quite good.

Actions such as paired Bluetooth-enabled devices, switching modes and switching stations are accompanied by sound evidence.

During the Bluetooth-connection tests, long press the corresponding button on the unit makes audible confirmation of activity, while the white LED light begins blinking rapidly. After that smartphones showed the device that appears in the list of available devices such as D22. After connecting the speaker produces sound proof once again, this time on a connection. When it is installed, the frequency of the pulses decreases LEDs.

Brand - Microlab, Model - Microlab D22, Type - Bluetooth Speaker, Channel - 1:0, The little size of the system provides the portability of the system, it doesnt take much space and will easily fit into any backpack or bag, and the wrist strap coming with it able to fix the satellite speaker in the hiking mode, allowing to prevent its loss, Others - Output power: 7Watt, Channel separation: > 60dB, Harmonic distortion: < 0.5 % , Type of wideband speaker: 1.5 Inches, Impedance: 4 Ohm, Specialty - Built-in FM radio with auto scan of stations, Silicon shell for protection against dust/moisture, as well as for protection of impact effects, Bluetooth 4.0 support, Along with the high quality of signal transmission in wireless mode, this version of Bluetooth allows to save the satellite speakers energy, which is very important in case of a long trip or hike, Rechargeable battery for convenient use, Ideal companion for various outdoor activities, Support of Micro SD-card, Waterproof, Shockproof and Dust-proof design, Warranty - 1 year