Engineered for professional calls.No matter where you are.

Hear and be heard when it matters

Hold completely natural conversations via speakerphone as both sides of the conversation are transmitted at the same time, allowing conversations to flow just as they do in person.

Works with all leading UC platforms

Versatile and easy to use and compatible with all leading Unified Communications platforms. Certified for use with UC, for an accessible, seamless connection experience and maximum flexibility when connecting with colleagues around the world. Enjoy a seamless meeting experience, whatever platform you’re using.

Simply being able to plug-and-play to your laptop, smartphone or tablet, using either USB or Bluetooth, makes collaboration so much easier. 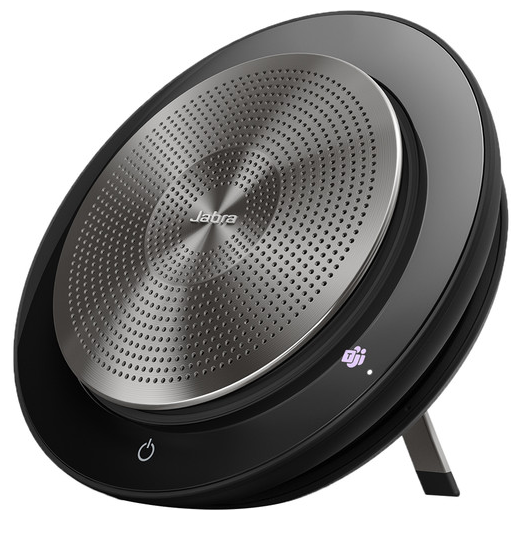 Hear and be heard on your conference calls with the Jabra Speak 750 UC USB & Bluetooth Speakerphone. Certified to work with Unified Communications Platforms such as Cisco, Avaya, Microsoft, and others, this round speakerphone features a 360°, omnidirectional microphone that can pick up sound from up to 7.5' away with echo and noise cancellation to help ensure clear conversations. Its rim has volume, call, and mute controls alongside a programmable smart button that can be set to speed dial a contact or launch a voice assistant. Lay the speakerphone flat on a table for multi-person conferences or stand it vertically on its kickstand for more directional audio. With a frequency response of 150 Hz to 20 kHz when listening to music, and the ability to link a second Speak 750 for stereo sound, this speaker can be used for both personal enjoyment and business.

The Jabra Speak 750 connects to your computer through its built-in USB Type-A cable and doesn't require additional drivers. Or, you can pair with Bluetooth-compatible devices for wireless connections. The internal battery is rated to provide up to 11 hours of talk time and can be fully recharged in about three hours. Weighing just 10.6 oz, you can pack the speakerphone into its included pouch and take it with you when traveling.

The Jabra Speak 750 connects to your computer's USB 2.0 port using its built-in cable. You can also pair the speakerphone with Bluetooth-compatible devices such as phones.

This speakerphone is certified to work with leading Unified Communications platforms such as Cisco and Avaya in addition to applications like Microsoft Teams and Skype for Business.

You can quickly pack the 10.6 oz speakerphone into its included pouch to take with you when traveling. Its battery is rated to provide up to 11 hours of talk time and can be fully recharged in about three hours.

The rim of this disc-shaped speakerphone includes volume, mute, call, and power controls. There is also a programmable smart button that can be configured to speed dial a number, activate a voice assistant, and more. The link button allows you to add a second Jabra 750 for stereo sound.